The Salamander project will be located off the east coast of Scotland, near Peterhead. The innovative floating technology proposed for this project will allow the turbines to be located far from shore and in waters approximately 100m deep, where traditional fixed bottom turbine foundations would be uneconomical.

By locating the turbines so far offshore, the visual impact of the wind farm on onshore communities is greatly reduced. Additionally, locating the turbines further out to sea will place the farm in an area of higher wind energy potential. Click here to see our simulated views from shore of the nearest turbines at 35km from the coast.

Our Vision
Image: Courtesy of Principle Power: Dock90
Our Vision

The floating capacity available in upcoming ScotWind
leasing round

The additional Scottish supply
chain content that could be
achieved in ScotWind floating
projects if a stepping-stone
project like Salamander is
developed.

There are a wide range of technologies and design concepts in various stages of research and development across the FOW industry spectrum. Each design concept offers pros and cons dependant on an array of variables including water depths, seabed composition, metocean conditions, and onshore infrastructure. 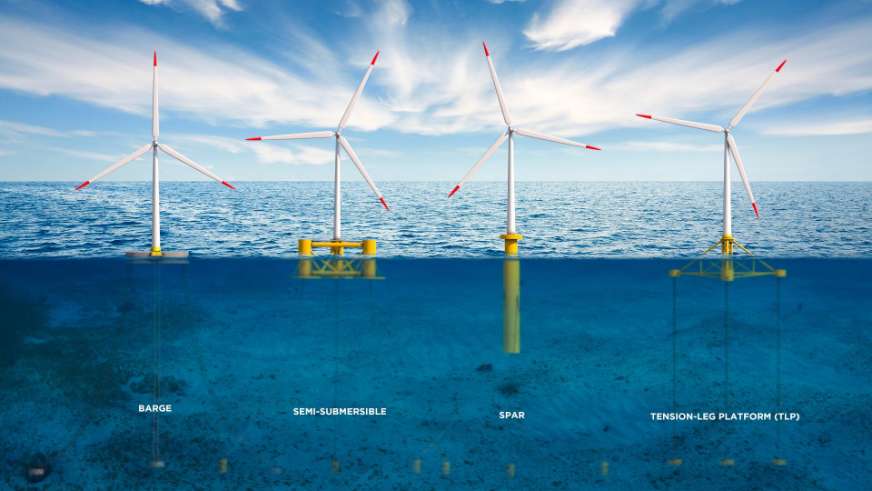 In 2016, and again in 2020, Simply Blue Energy undertook a ‘Technology and Commercial Review’ of Floating Offshore Wind Foundations. It was determined that floating wind solutions have matured, and an increasing number of foundations are now financeable. Arrays of ever-increasing scale are being developed globally utilising a variety of technologies. Simply Blue Energy believe that new floating technologies are key to maximising local supply chain content.

In March 2020, Simply Blue Energy announced a partnership with the energy giant Total to develop the Blue Gem Wind floating offshore wind portfolio, starting with Erebus, a 96 MW capacity project which will be in the Celtic Sea off the Welsh coast. This project will utilise semi-submersible WindFloat® technology developed by Principle Power Inc.

In July 2020, Simply Blue Energy announced the Emerald project off the south of Cork, Ireland and they recently announced a partnership with Shell.

Erebus will be followed by the Valorous project, the next phase in the stepping-stone concept…

Simply Blue Energy announced the Salamander project in February 2021, another floating offshore wind project, off the east coast of Scotland. This project aims to help develop local supply chain content to gear up for the commercial project requirements of ScotWind.